Hey, I published another book! + Update

It's official!  MOON-ACHE is for sale in the Kindle Store!  Like Book One, it's only $0.99 so what are you waiting for?  Get it now! *Cheesy 90s Commercial Dialogue Cliches Over* Man, what a relief to have it out--now I can throw all that neurotic self-inflicted pressure into worrying about when Book Three is going to come out;)

Get Moon-Ache on your KINDLE now by clicking this link!

And get it on your NOOK by clicking here!

Also, the Moon-Linked paperback is now $8.99, so >get it now< and then March can live on your bookshelf.  Wouldn't that be lovely?

Something to be aware of: I'm not going to make print copies of Book Two unless there is real demand for it.  It seemed most people were getting Moon-Linked from Kindle, so I don't see a need for spending all that money on printing Book Two if no one wants it that way.  However, if you would like it in print or some other form, then I would like to direct your attention to the Left.  You should see a Poll in the top left corner of this page.  Take it, participate, contribute, be heard!  If you let me know there's a need, I will try and see to it as best I can:)

Enjoy Moon-Ache--I'm really proud of it and I hope my hard work shows.  Spread the word, tell your family, tell your friends, acquaintances, strangers--even your arch-enemies!!

**UPDATE: The Polls are closed for now, but your votes are under careful consideration by, well, just me.  I have some exciting things planned for the near-future, maybe things you won't even expect...
Posted by Erin Irvin at 10:45 PM 7 comments

Oh, you know, just a cover-reveal and stuff...

I'm not gonna embarrass myself with that drum-roll fiasco again, so let's just do this. 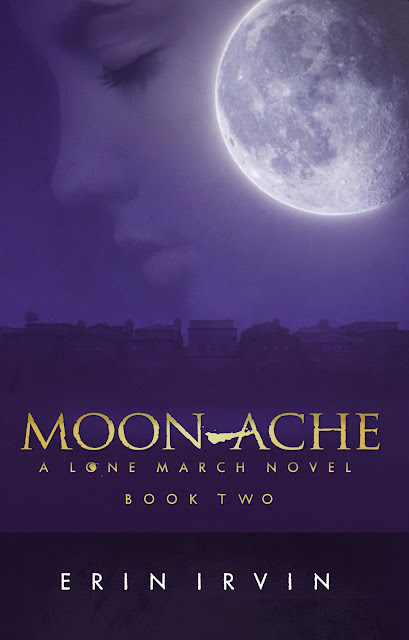 Isn't it beautiful??!!  It turned out way better than I even imagined it--a testament to the artist who did it (seriously, super hero, guys, super hero)!  Ryan Wieber is a good friend and amazing computer magician/graphic fx artist extraordinaire and it is a twenty-four carat truth that he is one of a very select few people I trust 100% to get a job done right.  If you don't know who he is, you should.  His website:
http://www.ryan-w.com/ryan-w/index.html
So yeah, that's the cover of Moon-Ache--can you believe it's here?  I can hardly believe it myself!

So, I guess the last little thing I need to address is the tiny matter of the release date.  Here's the sitch: I'm doing all the work to get it on Kindle myself this time around (someone else did Moon-Linked for me, so I haven't had to deal with this stuff till now) and I'm not sure how long it will take but it will probably be ready within the week.  I will update this post when I have a better idea of how far away I am from actually hitting the 'Publish' button.  But I have been working on everything all day (yesterday now, I guess) and I think I'm getting close.  Sadly, I'm not a robot, so I have to get some sleep now.  My brain says, "Power through--sleep is for fools!" but my body keeps saying, "Hey, f*ck you, Brain!  The rest of us are tired!" so I'm putting me and my limbs to bed now.

That's all for now--happy Sunday, friends!


**UPDATE! I have hit the publish button, so now it's just up to Kindle.  It should take anywhere from 24-72 hours to be available for purchase.  I will, of course, announce the official debut, so stay tuned!
Posted by Erin Irvin at 4:03 AM 2 comments

Book Two, Book Two, Book Two...I can't tell you anything.  Certainly not anything concrete.  But I will allow this: It is coming.  And this: Soon.  Obviously, I wouldn't be blogging just to remind you that the book is in the same boat it was in a month ago.  Obviously, there is a reason for this post, a happening that sparked my elation and motivated me to speak (or type).  Let me just say I have full confidence in the SUPERHERO who's doing the cover of Moon-Ache and I know, when I finally see it, it's going to be great.  It may be slightly different from the cover of Book One, but equally as lovely, I'm sure.

Now, you might not think any of that was news at all, but let me clarify this--I could not, under any circumstances, have posted that paragraph a week ago, or even a day ago.  The plain truth is I didn't know for sure if the cover would be seen to completion at all this year.  Now, it is an almost-guarantee.  So, this year, but no date yet because I don't want to get myself into trouble and have to retract something later; I hate retractions.

But, it's coming.  Soon.  And it's such a good stinking book, too (if I do say so myself, which, so what?).  Seriously, I love Moon-Ache.  It's, to me, a perfect second-book-in-a-series book.  I may have already said this at some point (I definitely have outside of this blog) but Moon-Ache was my favorite for a long time.  Basically it remained my favorite until I wrote the last few chapters of Book Four, at which time the two tied for favorite.  Now with Book Five in the running, I don't know what to think, but anyway, the only thing you need to take away from that declaration is that if you liked Moon-Linked, you're going to love Moon-Ache, and even if you didn't so much like Moon-Linked...you're going to love Moon-Ache.  Wow.  That's some serious swagger I got goin' on there.  But I worked hard on Book Two and I had come pretty far as a writer by the time I finished the final draft, so I'm confident in its quality.

Now what about those by-the-by intimations, you may be asking?

The first is that I'm kind of cheating on my whole 'take time off of writing in order to consume art' plan.  I'm def consuming, but I'm also writing things.  I stand by my profession that I'm not ready to start writing Book Six of Lone March; I can't start it till I've gotten myself to the proper mental/emotional place, in order to evoke the desired atmosphere.  So what am I working on?  Another little series I've had on hold for over a year.  When the idea first came to me, I wrote the initial three pages, then wouldn't let myself look at it or even think about it till now.  What decided me was my excitement over finding an artist to illustrate a children's book I wrote, the story of which is related to the series I'm talking about.  I won't go into all that yet, because not only is it extremely premature to talk about that children's book, but this artist is pretty much my art-soul-mate, if that makes sense, and as such, she deserves her own post, so when it's time to talk about that, I will be devoting an entire blog entry to her work and style and why I love it and so on.

The second is that I would like to reveal the genre/style of this little series, just to tease you a bit;)  At this point, I see it as four books total, and it will be aimed at the middle grade audience (ages 8-12) but older kids and even adults who are into this style of storytelling will def, def, DEF enjoy the books as well.  It's got some rather dark elements and deals with heavy things like death, only the main characters are kids, so it's kind of in between audiences really, which isn't exactly commercially viable, but I don't care because this story is so very, very special to me.  I guess you could call it a coming-of-age tale in a way...kind of...but mostly I think it's a 'caper' story.  And it's very British, as in England.  If you like Roald Dahl, Jane Louise Curry, Frances Hodgson Burnett, Lewis Carroll, Neil Gaiman, etc., you will enjoy my forthcoming __________ series.  Sorry--can't reveal the title yet!!  (But just know that even the title is lovely...maybe I'm biased...oh well.)

The third and last intimation, which is no doubt the one you will be most interested in, is that I would now like to plop the SYNOPSIS OF BOOK TWO, MOON-ACHE, into the space below.  Watch out--here it comes!


I looked up into the looming, baleful faces of eight were-ravens.  They stood around me, hunched over, with watchful, probing eyes.  I tried to scream, but I was too weak to make noise.
Her name is March Greeley Howe.  And she’s a were-wolf.  After escaping her captor’s den, and being rescued by an unlikely ally, March finds out what’s been happening in Glenbrook since she’s been gone.  Life will never be the same since Elliot’s take-over, and the last she-wolf in the world has some tough decisions to make.
In the midst of being forced to master her Lupine form, she is thrown back into her old life, with all the fear and uncertainty that went with it.  Besides being torn between Ethyn and Greyson, March fails to make sense of her hesitation in trusting Avery.  With both home and school upside-down, she tries to find solace in her friends, but soon learns she stands apart, and the divide only grows with each day of her double life.
In Book Two of the Lone March Series, March Howe meets some new faces and sees old ones in new ways.  She grows up fast when she has to make decisions no one else can, and embarks on a mission that will redefine her place in the pack.  Will she balance her were and human lives before the last of the were-wolves throw everything into chaos?
So there you have it.  Moon-Ache in a nutshell.  Man, now I wanna reread Book Two, after reading that summary for the first time in ages!  But, I gotta stay focused so I can't--and speaking of which, I gotta go get back to work on the _________ series;)
xxErin
PS. I swear you'll get more news on Moon-Ache as soon as I do!
Posted by Erin Irvin at 10:14 PM 0 comments