Moon-Burn is now available and it looks like quite a few of you have beat me to the punch!  I figured my official announcement would kick off sales, but I guess you guys didn't want to wait around for me to babble nonsense at you, which I understand completely.

Anyway, for those of you who have, for whatever reason, been waiting for me to babble nonsense, the price is the same as always, $0.99.  You can buy it on:

Amazon for your Kindle

Barnes & Noble for your Nook

And all three books are now available on Smashwords as well.

Here's the link to the specific Moon-Burn Smashwords page.

**Also, just a quick announcement, there is NOT a Sneak-Peek of the 4th book at the end of Book #3.  I will not be doing those anymore for the sake of upholding the integrity of each individual installment.  It was necessary in the beginning, but things are changing in the Lone March world and Sneak-Peeks just won't work anymore.  But rest assured the series is not coming to an end any time soon.  As some of you may know, I am hard at work on Book #6 now and I expect the series to be at least 7 books, if not 8, plus a certain companion piece that I won't be talking about for a while.  I honestly can't say for sure exactly how many books Lone March will have because I never really know how long it's going to take me to write a given portion of the story until I'm actually in the throes of writing said portion.

I want you to know that I am in NO WAY stretching this series out just to have more books, like I know some authors do.  You will find none of my books are "filler" books, in which not much happens because the author is merely trying to get as many individual books out of their story as possible to make more money.  As I've said before, you guys know I'm not in this for the money, as evidenced by the extremely low price point.  Sometimes low prices coax people into buying things, but I don't think it necessarily works that way with books.  Having self-published books at such a low price runs the risk of people writing them off, thinking they must be crap if they're both self-published and so cheap.  I'm glad you guys haven't overlooked my little indie series, but I promise you there are plenty out there who are.  The bottom line is I don't care about making money--I just want to share my work and connect with people.  Since my very first creative writing course at University, I have been told over and over again how hard it is to make an honest career out of being a writer.  I have taken that advice to heart.  There are, of course, exceptions, which you all know: Stephen King, J. K. Rowling, Stephenie Meyer, George R. Martin, and so on.  But these people are rarities in the writing world.  There are plenty of well-known authors who make a killing on one series but then drop off the face of the earth because their next books weren't exactly the same as the last series (go figure) and readers didn't care--and sometimes subsequent works don't even get picked up by the publisher at all.  That's right: just because you were successful with one book/series and made money for a publishing house it doesn't mean your next books are automatically accepted and published.  It's a sad fact, but true nonetheless--writers are in the never-ending business of having to prove themselves.  Doing this for a living basically means you're going to spend your life in a constant cycle of hazing worthy of college fraternities/sororities and every time you get invited into the house, you're kicked right back out to do it all over again.

Look at this, here I am doing exactly what I jokingly said I would--babbling nonsense.

The point of all that was just to tell you three things:

1. There won't be any more Sneak-Peeks, but that doesn't mean the series is ending.

2. That I personally consider myself to be a career writer--it's just that my career doesn't pay my bills, my day job does that.

3. That I have always and will always stay true to my characters and this series and tell the story as it needs to be told with no "filler" books.  If it ends up being 12 books (it won't) it's because that's exactly how long it took to tell the story I wanted to tell.  But as of right now, I'm looking at 7, possibly 8, with a novella to follow.

That's all.  I'll shut up now so that (hopefully) you guys can go off and read Moon-Burn!

PS. That announcement was neither 'little' nor 'quick', was it? 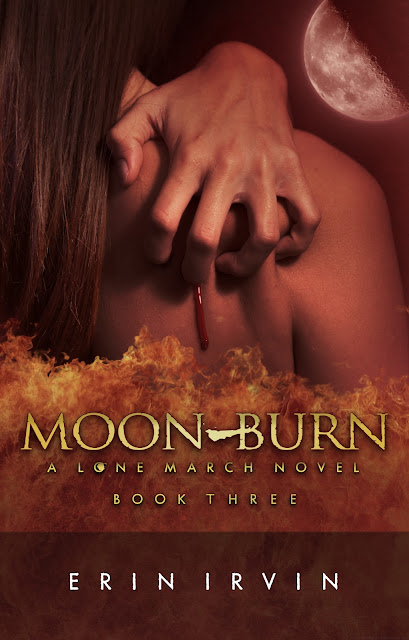 Oh, did I mention what the Moon-Burn Release Date is?

Psst...Hey, anybody wanna sneak a look at the cover for Moon-Burn?

Sorry I haven't posted in a while.  Honestly, there hasn't been anything to tell, book-wise, till now.  So, without further adieu.......

Hmm...I wonder what the rest of the cover holds...

You'll just have to wait and see;)

But the important thing to take away from the fact that I'm showing a little piece of the cover is that it means the cover is done and therefore, MOON-BURN IS COMING OUT VERY, VERY SOON!!!

So after re-checking the sneak-peek of Moon-Burn that I put at the end of Book 2, I realized just how much of Chapter One I had released.  In the spirit of not ripping you guys off with regurgitated material, I have decided to release Chapter Two as well.  Not in 3 installments.  Not even in 2, in fact, but all at once.  So here it is, all new, never-before-read material from Book 3, Moon-Burn.  Enjoy!

Hope you enjoyed it!  Moon-Burn is still slated to be released this month, so--barring any unforeseen cover art disasters--you will get to find out what happens next very soon!

PS. I should have news on the cover soon, so stay tuned!
PPS. Rhyming not intended.
Posted by Erin Irvin at 9:16 PM 0 comments