I've done a couple of interviews, though only one is out right now. The other one comes out in January (on my birthday--yay!). The one that's out already has been so for about a week and a half, but it didn't even occur to me that I should post about it--duh! Anyway, here's the link:

So you should check it out. It was a lot of fun and Ms. Kosiner is very nice.  FYI: You have to scroll past the book summaries for both books before you get to the interview.  Also, the site is holding a contest/giveaway thing for ebooks of both Moon-Linked and Moon-Ache, but I imagine everyone reading this already has them.  However, if you have friends who don't have them, you should tell them to enter--I think there are three weeks left on the contest.  And I will let you know when/where the January 5th interview is available, so stay tuned!

So, I've lost about 2 weeks. I moved 4 hours away to Austin, Texas. It's been the absolute hardest move I've ever made (and I've moved around a lot). The last couple of weeks have been filled with nothing but packing and cleaning and other moving preparation nonsense, so I haven't been able to write or play my guitar or anything really.  I've never been more exhausted (did I mention the new place is on the 3rd floor?--the balcony is amazing, but the stairs were not our friend when we lugged up the contents of a 17-foot Uhaul). We got everything in here yesterday, so today was the day I always look forward to, the day where I get to unpack and set all my stuff up and organize things. It's exciting and fun and always my favorite part of moving. Except I woke up this morning with a mind-splitting, nauseating migraine. If you're one of the unfortunate souls who suffer from real migraines, you know how crappy they are. Your life stops and you just want to die. So I spent the day in bed, nursing this beast and just staring at all my still-packed stuff. Take a look at this: 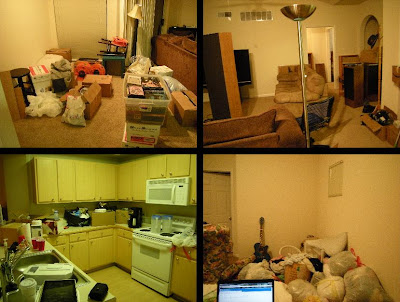 It doesn't look like much, but those pictures only just begin to capture the mess.  It was actually worse than that yesterday. Luckily, I got a little done last night, but it's still pretty much a disaster. Hopefully, I will rise in the morn' with no aches in the head and my full range of motion returned to me (my poor, little muscles). Once I'm settled, I can get back to work on Book 6 and that other book I'm working on that I can't really talk about.

That was my roundabout way of apologizing for being so absent on this blog right on the heels of releasing Moon-Ache. That was sucky of me. But I hope you guys are enjoying/enjoyed/will enjoy Book 2 and don't forget to tell everysinglepersonyouknow to read it.

I thought it would be fun to engage you in a game of speculation. For those who have read Moon-Ache, what do you think is going to happen in Book 3? The fact that it's called Moon-Burn should give you a bit of a hint, but if it doesn't, pull something out of your hind-quarters and do some speculating anyhow.  Leave a comment detailing what you think will happen next in March's story.  Or don't, whatevs.  But I encourage you to think about it anyway.  Because it's fun to think about it.  Be a detective--or a scientist--and do some hypothesizing.

That's all for now.  Good luck and Godspeed.